How to Turn Your Crackerjack of Ideas Into Mobile App Reality 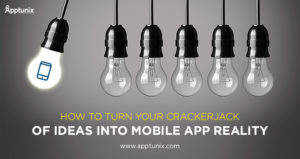 Brilliant that you are thinking the right way. A mobile app can really kickstart the growth of business like you’ve have never imagined before. So kudos just for merely embracing the mobile technology even if your idea is still raw. There are people out there to help you refine it and bring it into the shining light. But before you go any step further, you’ll have to take stock of some paramount considerations: how much would it realistically cost and whether or not you’d have to consider funding at some stage?

Take stock of the market

There’s plenty of homework needed before you can think about finalizing your idea. Figure out what category your app would fit into. What are going to be its rival apps and how stiff or relaxed the competition is going to be. A thoroughgoing analysis of the market would inform you about the shortcomings of the existing app, the major expectations of the target audience and how would your app be making their lives easier. An expert mobile application development company could assist you in your endeavor to understand the app markets.

Take time to explain your app

You have to absolutely describe every bit of your app, the demographics you’d be aiming, and the sort of image you’d be hoping to build. Filling out answers to these questions in a questionnaire is a great way to start things. That way your mobile app developers would get a clear indication as to your overall vision of the app. Such questions can indeed help them learn your mindset, how you like doing things and what are your designing preferences.

The choice of platform is a huge consideration. iOS and Android would be the major two platforms you’d find yourself choosing between. You may find yourself weighing up the prospects of better ROI in either platform. Our article on Android vs iOS would really prove helpful in your conundrum of choosing the right platform for your type of app. Mostly, people are of the view that an iPhone app development company is a better option if revenue is a major concern. That does hold some truth in selected demographics.

Cost estimation is a major concern. The cost you can afford determines the rough outlook of your app. As a general rule of thumb, costly apps tend to have tons of features with elegant designing. Middling apps are thought to be the outcome of lesser cost at the time of development. They don’t have that impressive designing and tend to be slow performance wise. Your choice of platform can also shake up the costs of development. A premium Android application development company could build sumptuous apps within a reasonable budget.

Your app is known by its name, so its only fair that you name is properly. The name if possible has to be self-explanatory and to a degree catchy as well as stand out among competitors. Moreover, it’s crucial that you get the app’s name right in the very first instance. That’s right. Getting your app’s name changed is a whole messy business. You don’t want to go down that route so name your app precisely in the first go.

Following the aforementioned ways is sure to give your app a fantastic reception in the app store. That’s considering you’ve given your best shot at your app development. If your app is to offer value to the end user, there’s no doubt why they won’t gravitate towards it.

CEO at Apptunix
I'm very passionate about mobile apps. Very early in my career, I had a liking for developing iOS apps. Once I was learned enough to create simple apps, I decided to go a step further and test out my skills in various different categories such as Marketplace, E-commerce and other popular kinds of apps. I realized that now I possessed the skills and the talent to work on anything to do with mobile apps. Now I have a company of my own, developing iOS, Android and Hybrid Apps. I like to think that the people around me have contributed a lot towards my success.