Of late social media savvies have been facing certain hassles while buffering along the home page of Facebook. Auto video buffering is definitely one of the challenges faced by millions of users across the globe. This discrepancy occurs after one has logged on to Facebook and scrolls down the page. Videos uploaded by the one’s you follow start streaming one after the other automatically even if you have not clicked on the thumbnail. This might drain out your data in case you are using a limited broadband package. Apart from being a wrangle for the data cap the automated video is also an inconvenience when it forces you to watch something you don’t want to experience. You wake up in the morning and scroll down along your Facebook homepage and all of a sudden a video commences where there is bloodshed! You would certainly want to get rid of it at once. Here’s a permanent solution for the generic question asked by all and sundry which is “How do I stop video buffering?”

Fortunes played fairly and came up with a scheme which would paralyze automatically played videos on a permanent basis. As Facebook implement such a strategy to attract more audiences to its videos it has also administered the fix for it in case it is nonobligatory for an individual. Yet another setback in this game plan is that you need to alter the settings from every device you use Facebook on since this is not an account setting but a browser based context. The only way to stop video buffering without your consent is to modify miniature details from your personal browser settings.

Here we are about to discuss Video settings on Facebook from different browsers and platforms:- 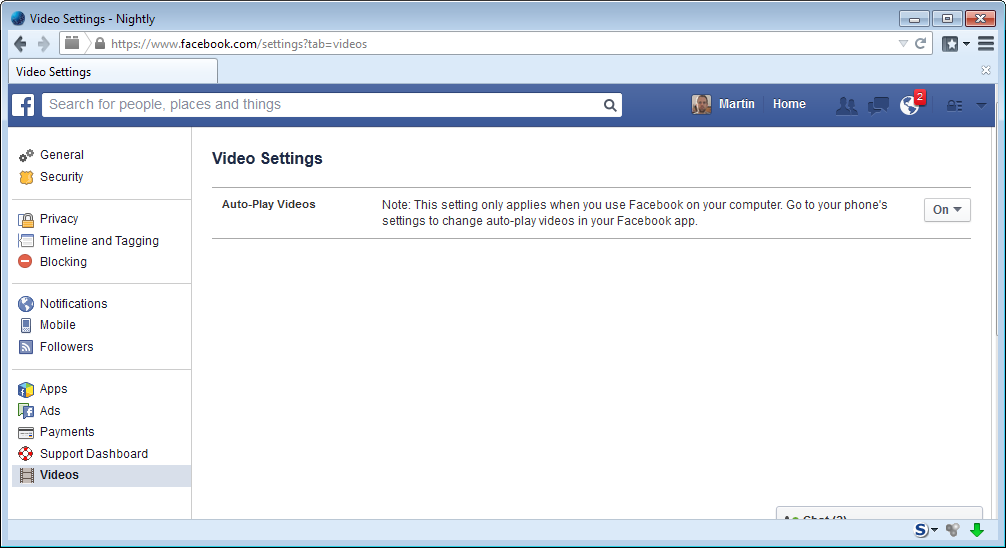 For a standard browser you need to basically navigate to the settings where you can view some options to your left and descriptions of each corresponding to the preferences. The top right corner of your profile has a dropdown just beside the lock button which leads to the settings. Click on “Settings” and scroll down to the last column which is coined as “Videos”. This classification contains only a single sentence which asks you whether you would want to keep “Auto-Play videos” or not. Use the toggle button to choose accordingly. Once you choose “off” auto-play videos will cease playing on that device.

Remember that’s not all. You need to amend the settings from each and every device which has Facebook running on it. Let’s discuss some steps which would prevent auto-play videos occurring on your Android application. For android applications the navigation is slightly different but is as effortless as the exploration process on your personal computer.

At the top right corner of the Facebook application you would notice three horizontal lines running parallel to each other. Once it is clicked upon a dropdown will appear where you could find a “Settings” archive. Select the option which is labeled as “App Settings” and here you would find options to alter Auto-Play features for Facebook videos. The toggle button which has an on/off discretion branded on it can be flipped according to you necessity. One enunciated feature has the sterling privilege to opt whether you would like to auto-play content in case your device is connected to a WIFI network and consider the other option of not playing the video when connected to your mobile data pack. Anyhow, you will now be able to salvage your bandwidth.

One might again be wondering what does the future have in store for iOS users. Would it block unwanted auto-play flicks in the same way that it does over Android and PC? The answer is “Yes, it is possible and is not at all an insurmountable task”. Because iOS platforms are robust and secure, most of the settings for different applications including Facebook are inside the central settings application of the iPhone. Scrolling down the list would bring you to the Facebook settings option. With a gentle tap on the settings toggle, the options to stop video buffering which is redundant become widespread. A single click on the settings button would provide the same option as Android which asks whether you would want to buffer Facebook videos automatically in a WIFI enabled environment. Here you are yet again the decision maker whether to allow traffic or not. It is definitely a boon that at least Mobile Networks consider limiting the streaming to WIFI networks only.

It is quite harassing if something is executed without the consent of an individual. No one would like their internet data cap to get exhausted. No one would appreciate unwanted videos to buffer on their profile continuously. With both pros and cons mankind has been gratified by Facebook, which in return has also provided fixes in case of any discrepancy.

Analogue at birth, digital by design

Latest posts by binesh (see all)

Social Rankings Based on Reviews & Sentiment.

Our rankings are completely independent, transparent, and community driven; they are based on user reviews and client sentiment. These social companies had to earn their way up and didn't just pay their way up.

View Rankings of The Best Social