Why M-Commerce Should Be Your Number One Priority in 2017 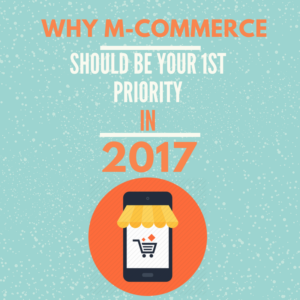 No, Yoda doesn’t say that. But it’s pretty much the wisdom of the digital era. Mobile is turning the “path to purchase” on its head. It is fundamentally changing the way people shop. There was a time when people ‘went’ shopping, now they ‘are’ always shopping. Always.

Did you know that the 20 billionth mobile phone will be sold in 2017? Considering that Martin Cooper made the first mobile call in 1973 and Steve Jobs introduced the first  iPhone in 2007, this explosive growth of mobile phones is incomprehensible. And there are no signs of it slowing down.

In 2016, Goldman Sachs published a report which indicated that m-commerce sales will be worth $626 billion in 2018 alone. This is staggering growth, particularly when compared to that of e-commerce, which some experts say it will double. In 2017, we’ll see not just established enterprises but also small and medium sized businesses capitalizing on m-commerce. The web is going to be left behind and mobile will dominate the world of commerce before we know it.

The Evolution of M-Commerce

Kevin Duffey, the creator of the m-commerce server, seemed to be way ahead of his time when he referred to mobile commerce in 1997 as “the delivery of ecommerce app capabilities directly into the consumer’s hand, anywhere, via wireless technology”. That sounds like a kind of lame definition now, doesn’t it? Especially after the drastic changes mobile has brought about in the retail industry and how it has forever changed the future of shopping.

M-commerce is predicted to reach $284 billion in sales by 2020. But its services were first delivered in 1997 to the people of Helsinki (Finland) where they could buy a can of Coca Cola through a mobile-enabled vending machine and pay for it by sending a text message. M-commerce has evolved so quickly since then that it has morphed into something entirely different now.

Smartphone apps are now the order of the day. 58% of US retail transactions took place on mobile app whereas only 42% took place on browsers. This statistic goes up to 81% in China, indicating a clear preference of apps over browsers. With more than 40% of transactions happening through mobile commerce, these countries are heading towards a cashless economy. Interestingly, at one point in time, these countries were also the leaders in the paper economy.

The State of M-Commerce in the US

Did you know that the US, even with its 222 million smartphone users, is not among the top 3 countries with the highest number of mobile shoppers? No prizes for guessing who occupies the number 1 position – it’s China, of course. But UAE and Turkey on the 2nd and 3rd positions respectively should come off as a total surprise. What’s more – the US is also not included in the top 3 fastest growing m-commerce markets. India (62.9%), Taiwan (62.6%) and Malaysia (45.6%) grab the first 3 spots.

This only goes to show that the market for m-commerce is still in its infancy in the US and the year 2017 is likely to witness a growth spurt. Amazon, which is the biggest e-commerce player, is surprisingly not among the top five m-commerce companies. TicketMaster (59%) ranks number 1 while Apple (58%), Target (53%), QVC (53%), and Kohl’s (48%) follow.

If these statistics don’t inspire you to go mobile, then consider this: In 2014, 560 million people used mobile shopping coupons. A recent report estimates that by 2019, there will be 1.05 billion mobile coupon users. A total of 16 billion digital coupons were redeemed in 2014, and this number is likely to double by 2019. Digital coupons are mostly redeemed by mobile users. More coupons redeemed means more money spent on shopping. Catch the drift?

Mobile: The Key Part of An Omnichannel Experience

Mobile phones have revolutionized the shopping experience. The average shopper not only goes to the store but also uses their mobile device to search for products, compare prices and check specifications. To browse on mobile and pick up from the store — that’s the latest trend. Mobile has therefore become an inseparable part of any omnichannel sales strategy.

Take the example of Ascena Retail Group, Inc., a leading specialty retailer of apparel for women and teen girls. The company embraced the omnichannel approach by including mobile as a key ingredient, allowing for a personalized shopping experience for their customers. The result? Ascena enjoyed a 40% jump in revenue on regular marketing campaigns and a staggering 250% on trigger-based campaigns.

And surveys show an interesting trend: nearly 76% of the customers in the US have enabled push notifications on their mobile devices. Businesses with mobile apps that use personalized triggers see higher engagement than those who send blast campaigns. The takeaway here is that if you want to be well positioned for success, you have to start sending targeted messages to your user base.

While there are many mobile payment gateways available today, not every business has realized its potential. Perhaps they are under the impression that customers still hesitate to use mobile while making financial transactions. But that is far from the truth according to a recent study, which found that 46% U.S. consumers report having made a mobile payment. That’s approximately 114 million adults.

The year 2017 is likely when these digital payment methods will go mainstream. Many retailers are opening up to the needs of their customers and upgrading their POS systems to accept mobile payments. Customers are also favoring in-app payments over long queues at checkout counters. In other words, everybody is gearing up for the m-commerce revolution! Why should you be left behind?