Five Important Benefits Of iOS App Development for Your Business

Mobile has become an important gadget in our lives. We start and end our day checking up our phones. Somewhere we all are addicted to our phones for various reasons like gaming, messaging, working and social media sites. Phones can considered to be mini or portable office to many as it can safely keep your important emails, messages and can even give you reminders for various important works or meetings. 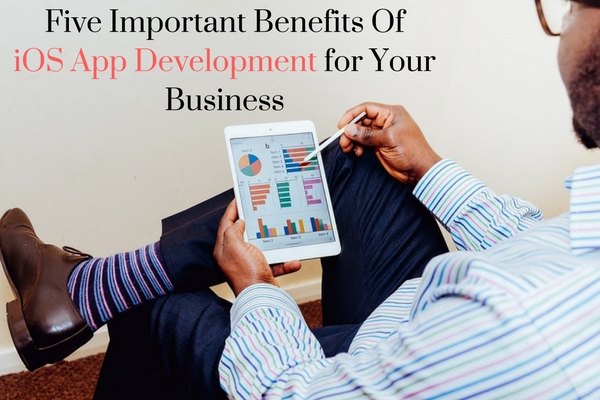 Each day numerous apps are launched and disappears but which remains are the one which are made for user’s comfort and leisure. Hence apps are responsible for longevity of phone in the market. iPhone App Development Company comes very handy when there is a need to take business to a new level.

What is an iOS App?

iOS stands for iPhone operating system which was specially developed by Apple. iOS is behind the success of many Apple’s device such as iPods; iPads etc. iOS is based on user interface and is for direct manipulation. Due to its success worldwide it has been launched again and again with updated versions.

Five Important Benefits Of iOS App Development for Your Business

A businessman is often confused between choosing for app development for his business. There are options available in the market but selecting ios app is more beneficial than any other platform. There are several benefits of ios app development by which you can have a successful business. Some are discussed below:

It’s an Apple’s App: Apple is still the leader in market when it comes to app. The client will be attracted easily if an app is created on Apple’s platform. Apple’s user can pay more in comparison to Android’s user. A user know that it’s not a cake walk for any app to enter Apple app store but when it is entered and accepted the user can understand the reliability of the company.

Customer Satisfaction: The core of any business is customer satisfaction. No business can survive long if it loses its customer, therefore having an app which has perfect hardware, flawless software and easy use can really make a difference.

Business Expansion: As ios apps are used globally it can definitely help your business to expand. Due to Apple’s global acceptance and use you may find customers from all over the world.

Safe Transactions: For any business to grow it needs money. If the payments are not received on time you are likely to lose on further orders due to unavailability of funds and further investment. iOS Apps are highly secured apps which allow hassle free transaction facilities without any hacking and phishing.

Rate of Return: No business can survive without profits. Some have more and some rely on moderate margins.

With an iOS app it is definite that you will get a constant acknowledgement from app store and business can grow on a constant speed.