What are the Factors Defining Tester Developer Ratio?

Project managers are often concerned regarding the ratio of tester-developer. It has been seen that the agile development paradigm needs more developers as compared to testers. Having more developers can increase the possibility of application breaking and can even create more concerns if the agile methodology is not implemented in a correct way. 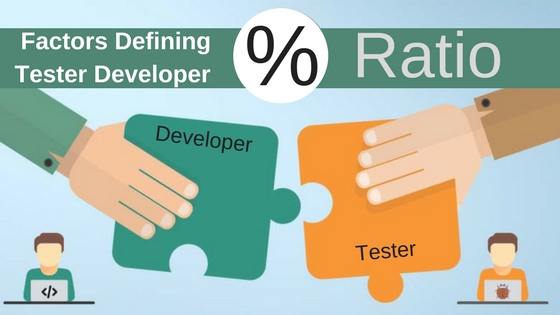 So what factors will settle on the number of testers required? Let us have a look. 🙂

It is a common notion that for a mobile online game app, you don’t require more than one tester. You can easily prioritize even if the scenarios could be infinite. However, testing needed more skill set and knowledge when it comes to the mobile messaging application along with more testing resources. This is why today, each and every software testing company is keeping a tester- developer ratio.

On the terms of agile, testers can add more value by creating test automation, working and doing exploratory testing with product owners in order to refine acceptance and requirement criteria.

Expectations of users on Quality

The users always look for quality standards. For instance, if you take an operating system like Windows 7 Professional, you need more testing as compared to Windows 7 Starter.

User Integration depends largely on the testing needed. For example, Google and Windows- The normal developer’s ratio to testers is 1:1 and in Windows Operating System it reaches to 1:2 and in Google, it reaches to 2:1. Depending on the apps, there are times when testing can’t be carried out via GUI. For instance, at Google, the testing is carried out by developers at the back end.

There are some projects and features in the primary phase with restricted functionality accessible for testing along with under developed application. Relying on the maturity of application, more or less effort in testing is needed. Although, in case if the application is not completed then testers may start working on the test plan, test design or requirement understanding etc.

Relying on the types of application complexities, timelines involved, and types of testing, resources are essential. Install testing, performance testing, and security testing can add scope as well as the complexity of testing.

The issue is, however, not all about the ratio of testers to developers, but it is about the software development project itself. With the huge popularity of agile, there is some movement towards integrating tester roles and developer roles where anyone can be allocated to any projects at any phase. Although, this is not very realistic as people have different personalities and skills with some testing and some suited towards the development. Also, sometimes developers think that testing is beneath them and a low skill level job, so they ignore the essential part of testing. Unless until this mindset changes, it will be quite difficult to combine the two roles completely.

Since many years, finding the right ratio of testers –developers for Software testing Company has become much more interesting. According to the book ‘Microsoft Secrets,’ Microsoft has employed the ratio of 1-1 testers to developers. As another poll of participants carried out in the conference session, it has been found that the common ratio was 1:3 testers to developers.

There is no appropriate answer to the question what is the right ratio. You may find a wide range of thumb rules for the ratio of testers to developers online. Some people are talking about 1 tester to 10 developers or some have different notion. The workable rations of those who are seeking industry norm of tester-developer ratios are wide. By better practices, leverage-based testing, and right tools, effective testing can be achieved.

Director at Technoligent
Chirag Thumar is working with Technoligent as a java application and software developer for many years. His major contribution includes the collection of web solutions like Java, Python, Asp.Net, Mobile Apps etc…. He has extensive experience in java web development and object-oriented programming language. You can follow him on twitter @Techno_Ligent and like our Facebook page TechnoLigent

Latest posts by Technoligent (see all)