Developers, It’s Time to Gear Up For the Industrial Internet of Things (IIOT)

In today’s fast-paced technology, new software’s have the potential to reshape the industries overnight. IOT is a giant network of connected ‘Things’, i.e. things-thing, people-things or people-people. It can be applied on a broader scale to things like transportation networks, connected cars, smart retails, connected health, smart cities and so forth. For example, with the help of updated GPS tracking system, you can take a different route, especially during bad traffic. The sensors in your car automatically open the parking gate of your company. These are few conveniences made possible into our daily lives by Internet of Things (IoT). 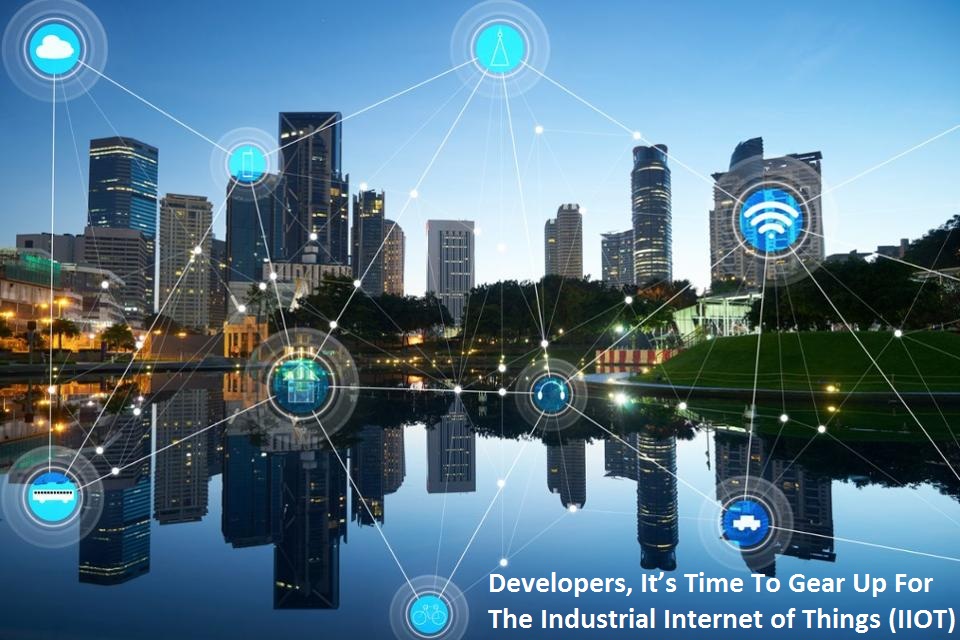 IIoT is the application of IoT to the manufacturing industry, but it is not limited to that. McKinsey estimates that IoT will have potential to drive productivity across multiple industries including manufacturing, healthcare, and mining. Applications include features such as:

The overall idea of gaining access to cheap processing, massive bandwidth, cloud-based applications, unending storage, uninterrupted connectivity are driving forces behind the IIoT. As a result of this improved analytics, businesses get a chance to improve the efficiency of their business, disrupt old and useless models and above all, provide better services to their customers.

The Time When a Developer Comes In

Industrial Internet of things (IIOT) is everywhere now-connecting millions of devices, machines, sensors, systems across the globe. It’s pretty much more than an overnight sensation. In the course of past 50 years, technological milestones, be it big or small —from large-scale system architecture breakthroughs to the most humble “Eureka” moments—have led to today’s IIoT. Moreover, they are still informing predictions for tomorrow’s industrial landscape.

However, the concept turns out to be a daunting prospect for numerous industrial manufacturers these days. With limited technology, standardization, companies would be hard-pressed to implement their own IIoT systems without a significant investment in the development of proprietary tools that may or may not be compatible with global IIoT systems further down the road. This means software developers will become in greater demand than ever. The piece talks about what developers can do to get the most out of our increasingly connected world.

Consider API As The Backbone Of IoT

If you are looking for numbers, we can go on and on explaining what IoT matters to an everyday developer. In fact, McKinsey finds that forty percent of the whole value of IoT hinges on its interoperability.

To reach its full potential, privacy and security concerns are supposed to be addressed effectively. But this won’t happen until and unless the devices aren’t connected. This leaves API as the driving force of the Internet of Things revolution offering endless opportunities for a developer.

API testing generally staves off the hugely costly recalls that come if things simply fall in its place. The testing automation will have to be combined with manual testing to check if that light really turned on and if it continues to turn on only when it’s supposed to. But that doesn’t mean it will be making tomorrows headlines, it will remain a silent partner delivering magic from behind the scenes. And maybe that’s the reason why API developers have a load of influence, but without the fame.

IoT is Not Just an Aspect Of Industrial and Business Spheres

To cultivate all the data, IoT will raise demand for more and more apps anytime soon. In the current scenario, around 11% of mobile app developers work on professional apps but are earning $5,000 more a month than their consumer counterparts.

Again the real value will be obtained from APIs that eventually feeds all this data into the platform that will curate it into actionable insights. As a result, the demand for a software development company who have experience in the buzzing trends will continue to grow. The emergence to automate the interpretation of data brought in by millions and soon billions of devices in our always-on, always-connected near future.

One of the biggest motivations to get involved in the Internet of things is by simply being a part of this movement. If you are participating in the present, you will get to be a part of the future as well. Several reports reveal: “As municipalities seek to bolster their digital infrastructure to become ‘smart cities’, a need for a local developer who knows their community well can provide a value of high sorts. Each city will comprise of a unique range of challenges that can be solved by none other than a nearby software development company.”

Despite big business promises, most cities don’t have the infrastructure in place yet or integrated apps but the isolated ones that work for individual local businesses. In order to make yourself present in your soon-to-be-smart city, start attending city council meetings and contacting your local representatives.

How else can a Developer get Involved?

There is no doubt in the fact that all this fuss over the Internet of Things could be a bit premature. But the next wave, i.e. Industrial IoT seems like turning tables across the globe.

All of these aforementioned considerations have one thing in common and that is it requires you to be a change. Take your digital transformation to the next level which involves strategy, collaboration, resiliency, mobilization of company-wide efforts, and flexibility. Last but certainly not the least, the best way to prepare yourself for the Internet of Things is fiddling about and stay inquisitive.

Pre-Sales Manager at TatvaSoft UK
Nishtha Singh works as a Presales Manager with a software development company named TatvaSoft UK. She relishes writing about various technology trends, management and much more. She simply aims to spread her knowledge of the latest technologies through her online contribution.

Latest posts by nishtha-singh (see all)