How to Counter Challenges in Implementing IoT?

The Internet of Things has been one of the biggest developments that hit the world in the last decade. It was an inevitable development in a hyper-connected world where we are using the internet to run our devices and connect with others. The seamlessly connected world is a given now and one that has the potential to change life as we know it.

But no one said that implementing IoT was going to be easy. What may seem like a simple linking of all our devices is, of course, far more complicated. For developers, IoT has been one of their biggest challenges, one that needs to be understood and implemented properly. The consequences of a botched up implementation can be pretty drastic — from crippling losses to even death! 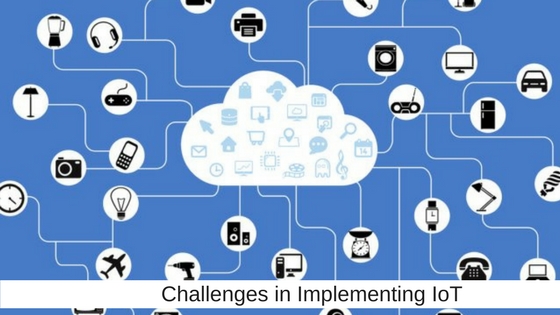 The biggest challenge for IoT developers since its inception has been its security. Connecting devices with each other obviously leave them open to malicious intrusion and hacking. Security in the IoT infrastructure concerns not just developers, but also corporations and governments.

Hacking into such infrastructure has already created major havoc, such as the attack on Ukraine’s power grids last year or the 2009-10 attacks that destroyed the Iran’s nuclear centrifuges. Corporations open to such attacks can see paralyzing losses. But as IoT becomes more and more ingrained in our life, it is not just the corporate information and government installations that are under attack. Hacking of devices like automated cars can even cause loss of life.

Given the complication of the problem and the multi-faceted doorways of communication we have today, the solution also has to be multi-tiered. We need gateways to gather sensory data and using a cryptographic layer for authentication. This will ensure that devices cannot be easily hacked into and malicious commands relayed. We need a stronger password framework since it has proven it be the most effective first layer of defense.

Fortunately, we have many developers working on developing security software to create an ironclad framework for the burgeoning IoT infrastructure. This includes working on better sensors at gateways, secure software development and using the cloud to update and manage security.

One of the main takeaways from IoT is its potential to gather data. With almost all facets of our life connected by devices, the number and relevance of the information we can curate is mind-boggling. However, this has been only partly successful. The challenges here are connectivity, aggregation and the extrapolation of data.

IoT visualizes a world that is seamlessly connected. While that may sound like a brilliant idea, in actuality it throws up the rather interesting challenge of compatibility. Sure, we have the software in our entire working device, but what about the devices that give us control? From phones, tabs, and laptops, that is too many devices on both sides of the spectrum!

Then there is the software. With so many software looking for a share of the pie we are now faced with bringing these many software together on the same platform. For developers, it throws up the challenge of ensuring compatibility, updates and debugging.

The very nature of IoT makes its testing more difficult than usual. While it is connected to the way software is traditionally tested and applied, its impact on our life is too great. This means that it must go through more stringent testing with clearly defined standards on privacy and security. As we go forward with IoT, the challenge in establishing and amalgamating security protocols in devices will only increase.

The autonomous nature of IoT deployment also brings up the problems of connectivity and the reliability of the users to install security updates. Though these concerns are also applicable to other software development Company, the sheer scope and potential of IoT make these concerns extra important. Rigid standards, as applicable to any other manufacturing device, could be a solution here.

Despite its daunting challenges, IoT is here to stay. What we need is a more innovative structure, but one that puts a prime focus on security and safety.

Director at Technoligent
Chirag Thumar is working with Technoligent as a java application and software developer for many years. His major contribution includes the collection of web solutions like Java, Python, Asp.Net, Mobile Apps etc…. He has extensive experience in java web development and object-oriented programming language. You can follow him on twitter @Techno_Ligent and like our Facebook page TechnoLigent

Latest posts by Technoligent (see all)