Have you ever thought about the power of a vision.  It is like a magnet that pulls you to it.  We have experienced this and encourage others to think of this as they go about there every day activities as the value and the benefits are difficult to quantify but the results are enormous.

Our client is a small to medium sized oil and gas company whose CFO believes that technology can be a major enabler for change and also believes that enormous opportunity exists to create value and competitive advantage where everyone else sees problems associated with people and clerical processes.

Companies in the oil and gas industry are not functionally aligned and processes have developed that creates significant amounts of handoffs between groups.  Data is inconsistent between groups and time and work is wasted processing accumulating and using the data.

The following is one example of a project we took on for the CFO and illustrates the benefits that were not clearly understood and the headaches that were eliminated.

The company process approximately 60,000 invoices annually at a total cost of approximately $2.9 MM annually.  This is about $50 per invoice.  What was frustrating was not only the cost but the issues associated with managing and paying the invoices.  Invoices were constantly coded wrong, they were lost and had to be found, they were not paid on time either being rushed to get them completed or extended because they sat in individuals desks for too long.

The total cost to the organization was much greater to than the dollar cost.  It affected the company’s reputation, the ability to get services performed and the likelihood that vendors wanted to deal with them.

We took this away and did a six sigma review which identified error types and then we mapped how and where every invoice came from, who touched it and what was required to be included so that it could be coded into the system and vendors eventually paid.  It was staggering to see the amount of manual interfaces required the variability of the process  as well as the exceptions that were included.

Our recommendations and project spanned a number of years but garnered benefits along the way.

One of the biggest issues that needed to be dealt with was change management.  The project spanned  all functional groups in the company as well as vendors.  It was the CFO’s vision and steadfastness to the change that finally allowed a successful implementation.

This project was a difficult to complete but having a vision and never wavering allows change to occur and drive results that were never contemplated.  Stay tuned for my next installment that talks about results that could not have been seen and the additional value it has added. 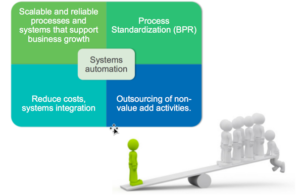 Our rankings are completely independent, transparent, and community driven; they are based on user reviews and client sentiment. These automation software companies had to earn their way up and didn't just pay their way up.